Cutting the Ribbon on the Burke Writers’ Room 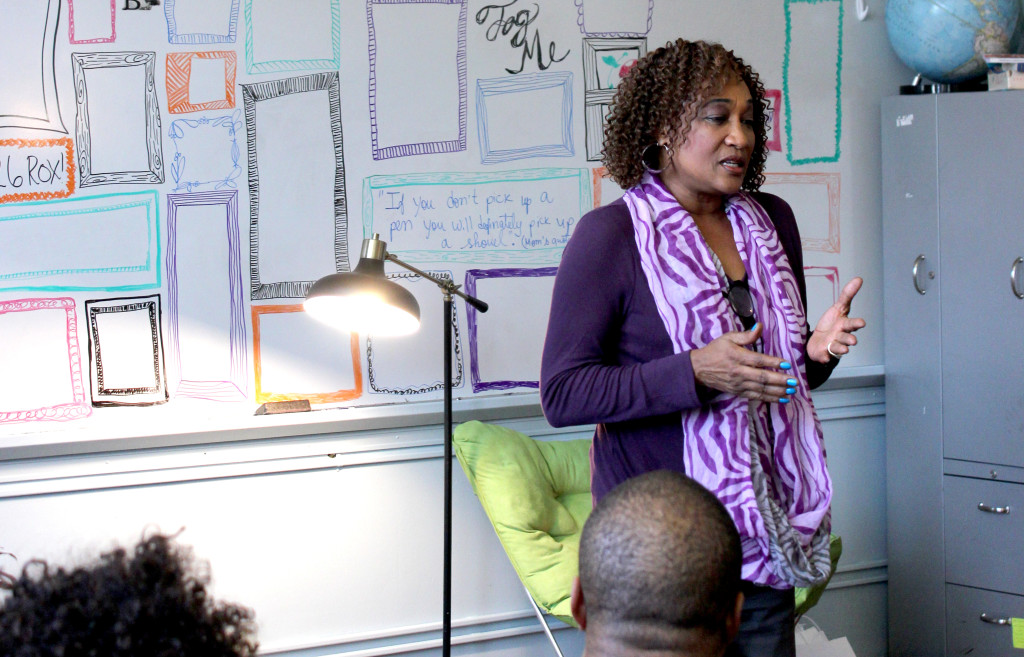 “I believe that every human’s vision is an exceptional piece of art. One’s eyesight allows us to analyze how colorful the world really is. Mama will always have a colorful heart, but without her vision, it is difficult for her to engage in this beautiful world.”

Boston, MA: 826 Boston welcomed BPS officials, teachers, and community partners to the Writers’ Room at the Jeremiah E. Burke High School. The program is a powerful example of partner organizations working with BPS to prepare students for life after school. At the event, two Burke students presented work that they recently published in the Writers’ Room.

The 826 Boston Writers’ Room at the Jeremiah E. Burke High School in Dorchester is operated in partnership with Northeastern University. The Writers’ Room is open from 8 AM to 4 PM, four days a week. During the school day, it hosts whole classes to work with volunteer tutors on academic writing assignments. After school, the Writers’ Room is a hub for extracurricular creative writing activities. Students are forming a slam poetry team, a journalism club, and a novel-writing club.

“We want to take this opportunity to thank the generous supporters of the Writers’ Room program, who made it possible to open this writing-focused space at the Burke,” said 826 Boston Executive Director Jessica Drench.

The 826 Boston Writers’ Room at the Burke is fueled by service member and volunteer support through partnerships with Commonwealth Corps and Northeastern University. 826 Boston currently operates two Writers’ Rooms, at the John D. O’Bryant School of Math and Science in Roxbury, and at the Burke.

The 826 Boston Writers’ Room at the Burke is generously supported by individual donors to 826 Boston, with foundation support from The Boston Globe Foundation, The Calderwood Writing Initiative, Liberty Mutual Education Initiative, The Ludcke Foundation, and State Street Foundation.

“You’re only as good as the people you’re surrounded by,” said Burke Headmaster Lindsa McIntyre. She went on to praise the progress so far at the Writers’ Room, noting that the Writers’ Room has had an impressive start so far, “teaching writing in the real world.”

Building on the success of its pilot Writers’ Room at the John D. O’Bryant School of Math and Science, 826 Boston launched a strategic initiative to open at least one new Writers’ Room in a Boston public school each year for the next five years. In fall 2017, 826 Boston will open its third Writers’ Room, this time in a K-8 school, with generous funding provided by a Catalyst Gift from The Wellington Management Foundation.