Last week, author Desmond Hall introduced Your Corner Dark, his new Young Adult (YA) novel, to 826 Boston students and readers across Boston in two virtual events. Partnering with 826 Boston, GrubStreet, Porter Square Books, and Boston Public Library’s Teen Central, Desmond shared excerpts from his new book, spoke of his journey as a writer, and talked with 826 Boston student-author Alyssa about the writing process. 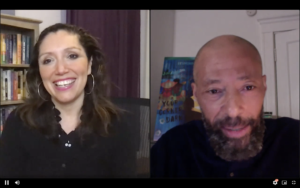 Desmond Hall, born in Jamaica and raised in Queens, has worn quite a few hats in his career—from high school teacher, to Spike Lee’s creative director at Spike DDB, to director of his own original films—but he’s always been a writer at heart. Eventually, his path as a storyteller led him to GrubStreet’s novel incubator program. There, he found a community of like-minded writers who helped him develop his craft and supported him through the hard work of novel-writing. Now, with the debut of his first YA book, Your Corner Dark, readers get to dive into Desmond’s story of Frankie Green, a teenage boy living in Jamaica. The book follows Frankie as he comes face to face with a big opportunity that comes with a very hard decision, all while navigating complex family dynamics.

“People can become many different things when put under economic pressure, and I really hope people see and understand that when reading Your Corner Dark.” Desmond said of the book. “I hope people reading really get a nuanced look at Jamaicans…and how families relate to each other.” Desmond spoke about how his understanding of the book changed throughout writing it. At first, he considered the book to just be a coming-of-age story, but then it became more complicated. “I realized I was writing an institutionalized story—whether a character has the choice of joining an institution or not.”

Desmond and 826 Boston student-author Alyssa, a 9th grader at the John D. O’Bryant School of Mathematics and Science, discussed scene writing and shared pieces from their writing with Boston Public Library Teen Central’s virtual audience. Desmond shared an excerpt from Your Corner Dark, and Alyssa shared from her piece published in Rubix, the O’Bryant’s literary magazine. Afterwards, Alyssa interviewed Desmond, asking him questions about everything from his challenges as an author to his favorite topics to write. 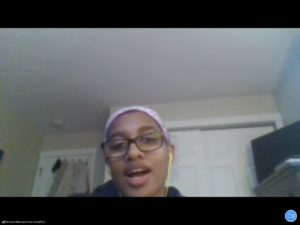 Alyssa, an 826 Boston student-author, shares her own writing with Desmond and the audience.

“Family is fascinating because the stakes are high and these dynamics are played out in Your Corner Dark—which means ‘stuck between a rock and a hard place’ in Jamaican patois,” Desmond said when Alyssa asked about the topics that interested him most. He finished the interview with reflections on the importance of community as a writer, something that Alyssa echoed and connected to her experience in the OB Writers’ Room and the Rubix Literary Magazine at school. The sentiment resonated with members of the audience as well, who were tuning in to the virtual event to be a part of a community of writers themselves. “It’s important to have other writers be part of your writing community because writing is very lonely. You need support,” said Desmond.

Don’t miss Desmond Hall and 826 Boston student-authors speak further on writing and storytelling together at an upcoming event with Brookline Public Library.

There Is Always Light