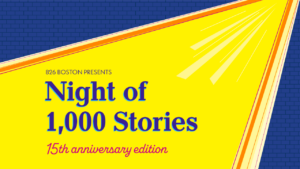 Join us on Wednesday, May 18, as we gather together for a magical Night of 1,000 Stories, filled with art, authors, and plenty of adventure.

Special guests this year include:

Get your ticket for this year’s celebration here.

This year’s event will be held at the Artists for Humanity EpiCenter. We’ll have cocktails, food, and a program you won’t want to miss—celebrating 15 years of stories—from 6:00 to 8:00 PM.

We hope to see you there! RSVP today.

Gish Jen is the author of one previous book of stories, five novels, and two works of nonfiction. Her honors include fellowships from the Guggenheim Foundation, the Radcliffe Institute for Advanced Study, and the Fulbright Foundation, as well as the Lannan Literary Award for Fiction and the Mildred and Harold Strauss Living Award from the American Academy of Arts and Letters. Her stories have appeared in The Best American Short Stories four times, including The Best American Short Stories of the Century; she has also delivered the William E. Massey, Sr., Lectures in American Studies at Harvard University. She and her husband split their time between Cambridge, Massachusetts, and Vermont.

Callie Crossley hosts the radio show and podcast Under the Radar with Callie Crossley and shares radio essays each Monday on GBH’s Morning Edition. She hosts Basic Black, which focuses on current events impacting communities of color and appears weekly on Boston Public Radio, GBH Boston’s midday talk show discussing current issues and cultural trends. Ms. Crossley has won numerous TV, radio, film and journalism awards, including the prestigious Gold Baton DuPont Columbia award, a national Edward R. Murrow Award, a national Emmy Award, and an Academy Award “Oscar” nomination for her producer work on the documentary series, “Eyes on the Prize: America’s Civil Rights Years.” She was awarded two Harvard Fellowships, honored with three honorary degrees, and serves on the Board of Trustees of her alma mater, Wellesley College.

Anjalequa Leynneyah Verona Birkett was born and raised in Roxbury before moving to Roslindale. She is currently 18 years old and attends the John D. O’Bryant School of Math & Science, where through the 826 Writers’ Room, she has been given a space and community to truly hone and admire her love and technique for writing and poetry. Her cleverness and artistry stems from her own life experiences and wanting to connect with those around her. She has volunteered with organizations such as A-VOYCE and BARCC to spread awareness of social issues that impact her community and help make and be the blueprint for change. In everything she does she makes it her mission to express the feelings of people around her and her own, and create a bright, and better future ahead. Anjalequa was named Boston’s second-ever Youth Poet Laureate in February 2022.