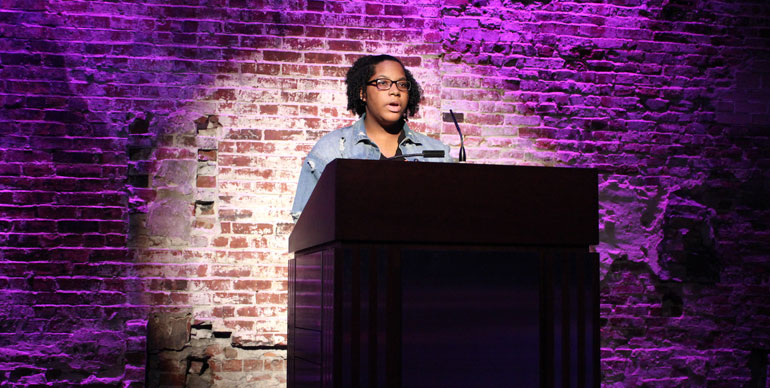 the cup of tea and bring on the massacre. city of
building up, up, up and people out, out, out. city of
ramming, city of running, of shifting, pacing, fast,

gone. champion of all. parade for everything.
celebrate the house, the keeper of our bones. nest
to our families. who will want if we won’t and what…

826 Boston slam team poet Khatazja performed on the Paramount’s stage alongside Boston’s newly minted Poet Laureate Porsha Olayiwola. Hosted by the Mayor’s Office of Arts and Culture, the event commemorated Olayiwola stepping into the city poet laureate role. The city poet laureate program was established in 2008 as a way to “highlight literary arts and promote a citywide appreciation for poetry.” 826 Boston is looking forward to enjoying Olayiwola’s tenure as poet laureate, as her commitment to youth poetry is one that we share.

826 Boston Advocates for the Arts