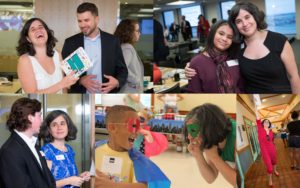 Not long ago, Karen Sama celebrated 10 years working with 826 Boston! We recently got a chance to catch up with the busy Out-of-School Time Program Director and get answers to some questions we’ve been dying to ask…

Take us back to your first day on the job 10 years ago…what do you remember most about that day?

I remember during my training that day, everyone kept mentioning a student named Dalhaysy when they showed me materials or were putting a student’s name into a “for-example” scenario. I thought, “Who is this kiddo? I really need to meet her!” And I was floored when I did! She was incredibly gregarious, enthusiastic, creative, and ready to take on the world. She is currently in college studying to become a teacher. Her dad still lives in our building and stops by from time to time to see how we are doing.

Before working here, what was the most unusual or interesting job that you had?

I once had a job for three days that at one point found me firing confetti cannons off a seventh story catwalk on a building right outside of Times Square. I also played a space pig once in an episodic children’s theater production. I am sure that both of those credits helped me get this position, and the experiences have come in handy more than once.

What do you enjoy most about your work now? Any specific moment that’s stuck with you over the past decade?

Getting to see students grow up and up and up is always my favorite part. In the past few years, students who have moved on from our program have returned much taller than me with implausibly deep voices in some cases and always with incredibly inspiring life updates.

One specific moment I remember is a student named Kamari coming to me with a disagreement about a note he had gotten about a story he wrote while we were working on final drafts.  He was refusing to revise, saying his story was perfect. In talking it through, it came up that he had been asked, amongst other things, to revise the end of his story to make it more exciting and action-packed. As it stood his story ended fairly quietly, in a way that was very reminiscent of Ezra Jack Keats’ The Snowy Day. It was poignant and sweet, and we talked about the great power it had to create a feeling in the reader, and that I agreed with his choice as the author to keep it. After finishing up a few other minor notes and revisions, I announced, “You’re done! I’ll put this away!” thinking he’d be glad to wrap up after all the work he’d done. He asked me to give his folder back because he decided of his own accord that he wanted to revise something else. It seemed that he landed in a place where he really saw the power that his craft would have on the reader and wanted to use it.

I like to read, pat other peoples’ dogs and cats, have conversations with everyone, collect jokes, and dance.

What is one thing that you believe most people do not know about you?

I grew up speaking both English and Spanish, and I know how to say “What?” in a variety of languages.

Have you ever had a story, poem or song written with you as a character or the subject?

Oh yes. As a matter of fact, I believe I can be found flying in the air eating apple foods in our next publication, due out in January.

If you wrote an autobiography, what would be its title?

If you can believe it after reading all of this, I’m not huge into talking about myself, so the title would be “Enough About Me…” and instead of an autobiography, it would be a collection of things I find very interesting and my favorite jokes.

Lots of murder mysteries. I love the mechanical nature of how everything connects in mysteries in general, and especially appreciate great character duos and their dynamics (Poirot and Hastings, Wolfe and Goodwin). Also the Rivers of London series by Ben Aaronovitch, which I can’t recommend enough.

A record-breaking Books for Breakfast