826 Boston students during a fiction and poetry workshop

A Response to Why Kids Can’t Write 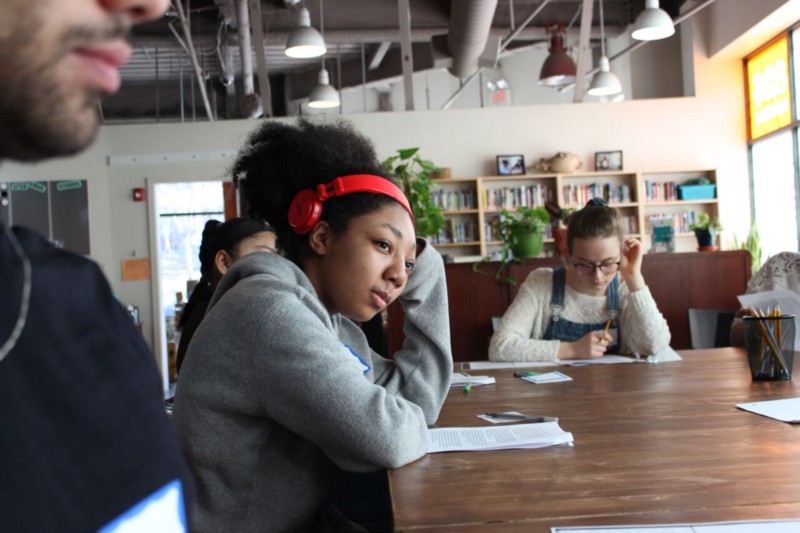 826 Boston students during a fiction and poetry workshop

On a Friday morning last October, I sat beside a young man from the Margarita Muniz Academy, the first dual-language school in Boston Public Schools, as he drafted his college admissions essay. We had just spent half an hour talking about possible essay topics, and had fixed upon basketball. Having mumbled one-word answers and stared at his knees for most of the session, Juan came alive telling me about how he learned to play, how good he was, how moving on the court felt like dancing. I furiously took notes and told him to put everything he had just told me on the page.

Juan labored in silence for ten minutes and produced a list-like sequence of sentences: I love basketball. I started just one day at school and I am good at it because I work hard. I dream to play on a college team. None of the gorgeous, poetic, rhythmic words that had spilled from his mouth when he had been talking had made it onto the page.

A recent article in the New York Times, “Why Kids Can’t Write,” found that American students lack proficiency in writing, according to a range of measures from the National Assessment of Educational Progress (NAEP) to the ACT writing exam and college entrance exams. Surveyed educators agreed that the problem was rooted in teachers’ lack of training in how to teach writing, and indeed, were often not confident in their own skills as writers. The article featured two key approaches. The first approach focused on the fundamentals of grammar and basic sentence structure. The second approach drew from the theory that continuous exposure to “quality prose” would lead to natural imitation. The article concluded that writing teachers should synthesize the two approaches.

But what I have learned is that the golden question isn’t why kids can’t write but instead why they don’t write.

As the Education Director at 826 Boston, a nonprofit youth writing and publishing organization based in Roxbury, Massachusetts, I have found myself observing through a whole new lens how kids learn to write. Coming from a traditional high school classroom and a district where I was mired in the daily routines of looking at student writing through the lens of ever-looming standards, I have found it easy to fall into the rhetoric of lamenting that students can’t write. But what I have learned is that the golden question isn’t why kids can’t write but instead why they don’t write. As educators, we have to figure out that question before we begin to figure out how to help them improve as writers.

There are many reasons why kids don’t want to write. First, what’s the point? (It’s boring. It doesn’t matter. I’m never going to have to do this again.) Two, it’s hard. (I can’t do it. I’m not good at it. I don’t know how to start.)

When I taught high school English, I alternately waxed poetic about the power of creating beauty through writing and exhorted students about the practical importance of being able to fill out job applications and write emails. But then, I would ask them to write prompts like this one, from the 2015 PARCC literary assessment:

Or, this one from the ACT:

Write a unified, coherent essay about the increasing presence of intelligent machines.

Neither prompt makes the case that writing is a transformational experience. Nor do they make a particularly strong argument that they will prepare students to write business emails and fill out job applications.

As educators, many of us rarely take the time to imbue students with a sense of purpose in writing. Perhaps it’s because we often operate with the single-minded goal of preparing students to successfully jump through the hoops that allow them advancement from grade level to grade level, high school to college. But at the root of it, writing is about voice and teaching writing is about teaching students how to use their voices. It’s about teaching them how to figure out what they want to say, why it’s important they say it, and then how to say it on the page.

At 826 Boston, we are using the National Writing Project’s Analytical Writing Continuum to break down these three important tenets of writing. But rather than having the students use the AWC to assess their own writing, our team and our dedicated cadre of over 1,000 volunteers are using the AWC to make sure that we are aligning our tutoring and instruction to these three tenets.

Are we supporting the students in a way that helps them crystalize a content focus (what they want to say)? Is that content something that matters enough for them to convey a stance (why it’s important to say it)? And are we supporting them to say that in a clear, authentic voice, using fluid sentences and precise diction (how to say it)? As much as it is a training tool, the AWC keeps us accountable to our mission of preserving and amplifying student voice.

We have found that when students see a direct relevance between the writing assignment and their own lives, students automatically know what to say and why it’s important to say it.

Supporting students to find a content focus that matters to them has always been one of 826 Boston’s specialties as an organization. Most of our programs focus on supporting student writing projects that are student-driven. For example, students in our after-school programs publish semester-long creative chapbooks centered around themes that the kids spend a month brainstorming, culling, and then voting on. They result in collections of stories ranging from traps and escapes and fantastical bedtime stories to superheroes and villains across shared universes. Our yearlong Young Author’s Book Projects also center around the mission of amplifying student voice, in an immediate and relevant context. In I’m a Flame You Can’t Put out/ Soy Una Llama Que No Puedes Apgar, fifth grade students at the Rafael Hernandez school wrote poems in English and Spanish about their dreams, their families, and their roots. In 85 Cents May Not Sound Like a Lot, tenth graders at the O’Bryant School of Math and Science and 11th graders at the Jeremiah E. Burke High School teamed up to interview stakeholders and write research-based advocacy pieces about what they wanted to see change in the future of Boston public transportation. We have found that when students see a direct relevance between the writing assignment and their own lives, students automatically know what to say and why it’s important to say it.

Supporting students in figuring out how to say what they want to say has been a more challenging area of focus. When I was a first-year teacher, I found that my instruction more often got in the way of a student figuring out what to say. I flooded students with “model” prose by Atwood, Fitzgerald, and Faulkner; but rather than being inspired to mimic their sentences, my students often decided that they must simply be bad writers because the model language seemed so unfamiliar. My lessons on grammar and conventions paralyzed students from writing anything but simple sentences, for fear of getting anything more daring wrong.

When Juan told me that he wanted to write his college essay about basketball, he had a clear focus. His desire and conviction in why basketball mattered to him rang clear. But what happened in that transition from his mind and his excited conversation to the words on his Chromebook? He had moved from impassioned speech to these sentences: I love basketball. I started just one day at school and I am good at it because I work hard. I dream, to play on a college team. Basic, elementary, with minor errors. When I asked him to flesh out the details, he said he didn’t know how.

“Okay, then,” I said, referring back to the best tip in the 826 Boston Tutor Guide, which encourages tutors to go back to inquiry, conversation, and transcription. “Can you just talk to me again about why you love basketball and how you started?” Juan began speaking and I began transcribing. Minutes later, I paused and told him that I wanted to read him what he said, word for word:

A move in basketball is like a song. At the moment, you do it or you don’t. I learned my shooting from watching Carmelo. I copied the way he shot until I figured out how to make my own shot. I hold my body straight. When I let go of the ball, I flick my wrist. I learned the Eurostep, moving my arms in one direction with the ball and then switching it to the other side in a second step before laying it up. I learned the Up and Under: jumping up on one foot, bringing the ball up with my two hands, setting it up on one side of the rim with one hand, then switching the ball under the rim and laying it up on the other side with the other hand. I started playing at school by myself, in the gym, on the playground, on the basketball court. I knew I was getting good when people walking by asked to play with me. I started playing three-on-three. I hustle played. I threw myself for the ball. I played Fifty, where I outshot everyone. All I did — and all I do — was eat, sleep and think basketball.

Up until then, I’d been a dancer. I danced everything. Merengue. Bachata. Hip hop. Salsa. Tango. Country western. Ballet. Kizumba. Jazz. Housing, where your feet make super fast patterns on the ground. You name it, I danced it. Basketball and dancing share a physicality.

Even copying and pasting this excerpt from the essay now, I can’t help but think, Wow. Hearing me read those words then, Juan was wowed, too. He asked me to see the words on the screen, then reading them carefully to himself, moving his lips silently. It took him awhile, then he looked at me and said, “I really said all that, didn’t I?”