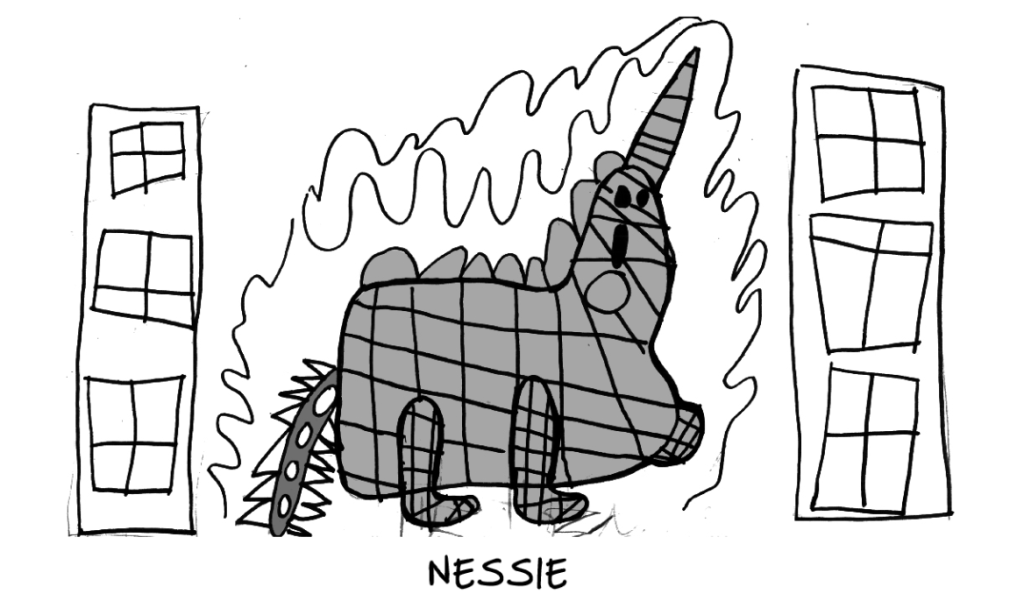 Today in Paris, I saw something through my telescope that was diamond-blue, light green, and reptilian: the Loch Ness Monster. She ate a lot of food, mostly other fish. She looked so full, and then she threw up the eyeballs and the scales. Then zombies came from the graveyard! The zombies thought the Loch Ness Monster was faking being a zombie because she was the same colors as them. They knew she wasn’t one of them, so they tried to eat her because she looked so irresistibly tasty.

Oh, no! I watched as a bunch of zombies surrounded her, standing on the ground and on the bridges. She zoomed away! But the zombies had already seen her and would recognize her. I knew they would chase her forever.

I needed to help her! I went down to the river. I pulled out a flare, lit it, and walked into the water. I knew that the zombies would be attracted to the green light.

My plan worked! The zombies walked into the water and melted away.

I used my whistle to communicate with the Loch Ness Monster and tell her that she was safe. She came back to Paris and we had a party at the aquarium.

Logan is inspired by his mom and his dad. His hope for the future is to fight segregation. Logan has a lot of nicknames, such as "Lolo," "Blissey," "Wolverine," "Loge," and "Poge." His brother just calls him "LOL."