By Brandon in Kibbles Was Fine, But the Car Had a Dent 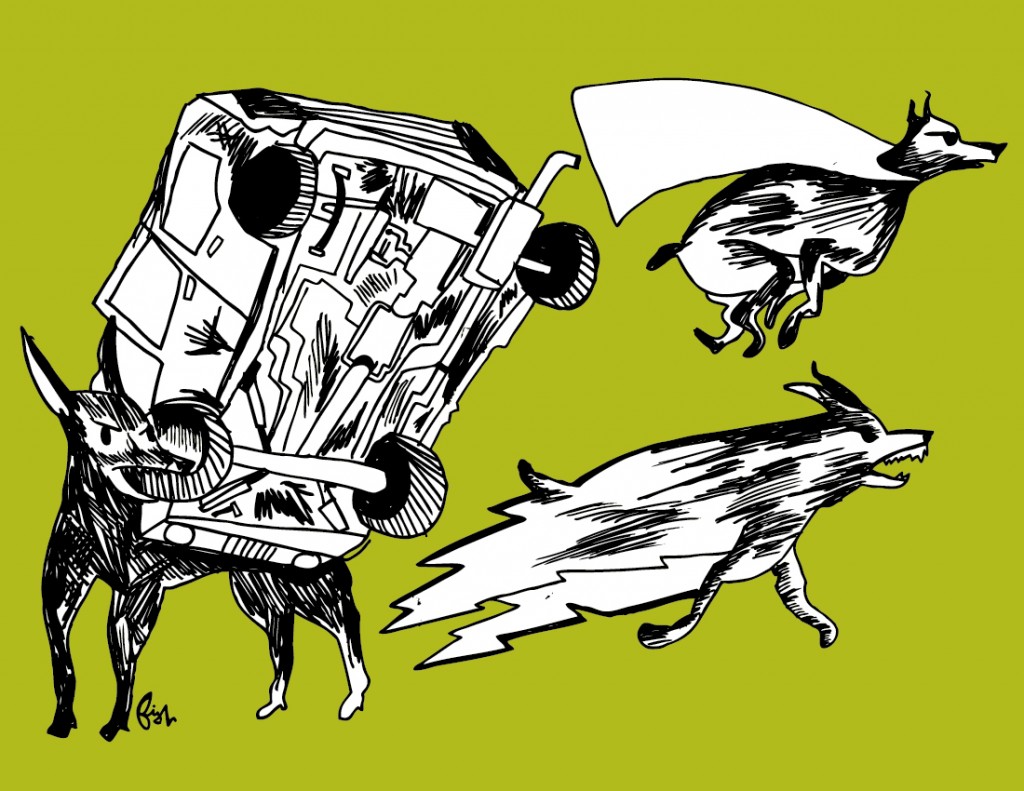 There once was a dog named Kibbles. Kibbles was a Doberman Pinscher, and his color was dark brown. No person had ever liked Kibbles because he was not as cute as the black dogs.

Kibbles was born in a shelter, and lived with other dogs that no one wanted. Kibbles and the other dogs that were not adopted were taken in a box to the corner store to be given away for free. Kibbles jumped out of the box and ran away.

Kibbles got a job as a guard dog. One day, Kibbles thought that he smelled a bomb, but when he opened the box, he found a piece of ham inside instead of a bomb. So he ran off with the ham in his mouth and ate it.

While he was eating the ham, some evil guys caught Kibbles with their net. Then they brought him back to their lab and put him in a cage. Kibbles was in a cage all night.

In the morning, the evil guys took him out of the cage and picked him up to give him a shot. All of a sudden, Kibbles jumped out of the guys’ arms and escaped! Kibbles ran out of the lab. He looked back and saw the evil guys chasing after him, so he ran even faster. When he turned back around, he saw that he was going to run into a cabinet, but he could not stop. He hit the cabinet and it fell on top of him, knocking over the evil guys’ beakers that had special powers in them. Now Kibbles had super powers: strength, speed, flight, and invisibility.

Kibbles ran through the closed door and into the streets, where a guy was driving his car home. The car hit Kibbles! Amazingly, Kibbles was fine, but the car had a dent. The guy got out of his car to see what had happened. He looked under the car, where he found Kibbles sitting. The guy said, “Here, doggie.” Kibbles walked towards him, and the driver put Kibbles in his car and drove home.

When they got there, the guy’s son came down the stairs, and Kibbles licked him, but the son pushed Kibbles away. When the son pushed him away, Kibbles thought that he did not belong there. The older guy had to take care of Kibbles, because his son did not want to do it.

The next day, the older guy insisted that his son take care of Kibbles, so the son took Kibbles to school with him and tied him to a gate. Then, the boy was sent to the principal’s office because he had been sending in fake sickness notes. The principal sent the boy back to class, but he had to wait until the bell rang. The bell finally rang. The boy took Kibbles home to get a Frisbee, and they went to the park to play. Later, they went home and got something to eat.

The next day, the boy left Kibbles at home instead of taking him to school. Kibbles got bored and destroyed the house with his super powers. He tipped over the couch, broke the TV, and got food on the floor. When the boy came home, he was shocked by the mess that Kibbles made. The boy cleaned up the mess before his dad got home.

The boy liked Kibbles now, because he got used to him. The boy and Kibbles began to do many things together, such as going to baseball games, playing at the park, and playing together at home. Kibbles now had a family that loved him very much, and for Kibbles this was a dream come true!

Brandon wrote “Underdog” when he was thirteen years old.

Brandon likes to play soccer and football, and also likes the Celtics. He loves to write stories.