By Abdulsalam in Invincible! 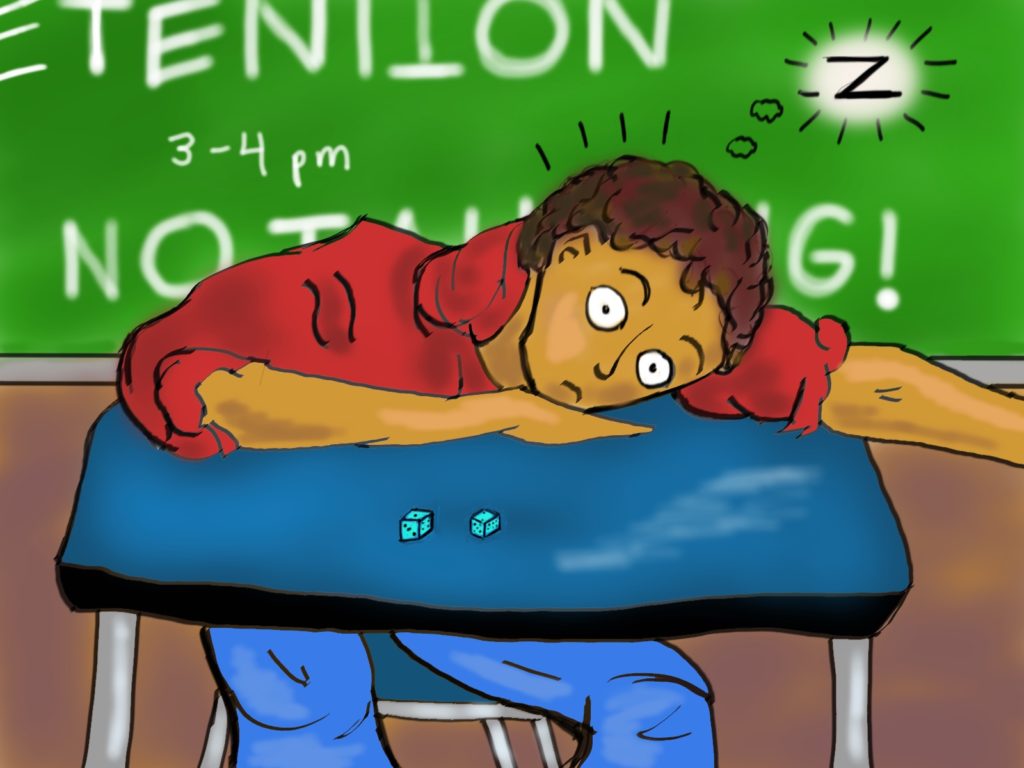 “UGGHHH,” Charles thought as he worked through a Latin worksheet. “Why do we have to learn this stuff?” Just as that thought ran through his mind, his friend Bob passed him a note: Dude, I found this weird pair of dice. Wanna come to my house to see?

Sure, Charles wrote back.

Later That Day at Bob’s House

“Dude, look at this sheet I found with the dice!” said Bob. When Charles looked at the dice, he was amazed.

“Wait,” Charles said. “There’s more than six combinations. Where are the other thirty?”

“No, no, no, no, no, don’t touch that. It’ll restart the universe,” said Bob as Charles touched a bottle that had a snake curling around it.

“UGGHHH,” Charles said as he woke up. Charles was a troublemaker. He was in detention every other day.

“Where’s my phone?” As Charles woke up, he soon realized that his phone was gone and he was in detention. As he looked around, he saw the teacher standing above him with his phone. “Detention ended three hours ago; take your phone and go home.” Charles grabbed his phone and dashed out of school. As he looked at his phone he saw that his mom had called him ten times!

“Oh man,” Bob grumbled, “I’m going to be grounded!” As he walked into his house, Bob saw his mom glaring at him. “What did you do?” she basically yelled.

“Nothing. I put a rattlesnake in my teacher’s desk.”

“Up to your room now!” his mom yelled. As Bob went upstairs, he took the dice from his pocket and wondered how he got them. Okay, he thought. I bumped into an old lady and she dropped these along with a piece of paper, but when I bent down to give them to her she was gone.

The next day at school, Bob and Charles decided to try their first roll, right there and then. Charles threw the dice and blinked. What he saw amazed him. Well, nothing changed, but something certainly felt heavier in his pocket. As he pulled his wallet out, he saw that it was bulging. He looked over at Bob, and Bob looked back at him, his own wallet in hand. Tomorrow will certainly be an interesting day.

“Hurry up and roll them,” yelled Bob. Charles threw the dice, and when they hit the ground, it was their lucky day. Bob and Charles both got a one hundred on the quiz when they guessed through the whole thing.

Bob said, “Let me have a chance at rolling them.”

“OK” Charles said, “but make sure not to roll a one and a five.” The words were not even out of his mouth when he saw what Bob had rolled. Uh oh.

“Why did you roll a one and a five? Now we’re going to have our nightmares come true.”

“No,” Charles continued. “I specifically told you not to do that and now look.”

“Charles, look behind you!” Bob yelled.

As Charles turned around, all the monsters that you could ever think of, plus Charles’s and Bob’s teachers, were crawling up behind him.

“Run!” Bob yelled. They ran to the bathroom and locked the door.

“The reader wants us to keep going,” Bob said.

“Man, give me those dice,” yelled Charles. As he rolled a one and a six, he could see the monsters disappear. He woke up in detention.

Original writing about heroes and villains by the students of 826 Boston’s Egleston Square After-School Writing and Tutoring Program.
View In Store Read more from this book »

Sign Up
More amazing student stories See all student work
Untitled by Sarah T.
7 Year Old Me by Helen
Hello, my name is Haran. by Haran
Sneakerhead by Angel
See All Student Work