By Hector in It's Not the Stone That Brings You Strength 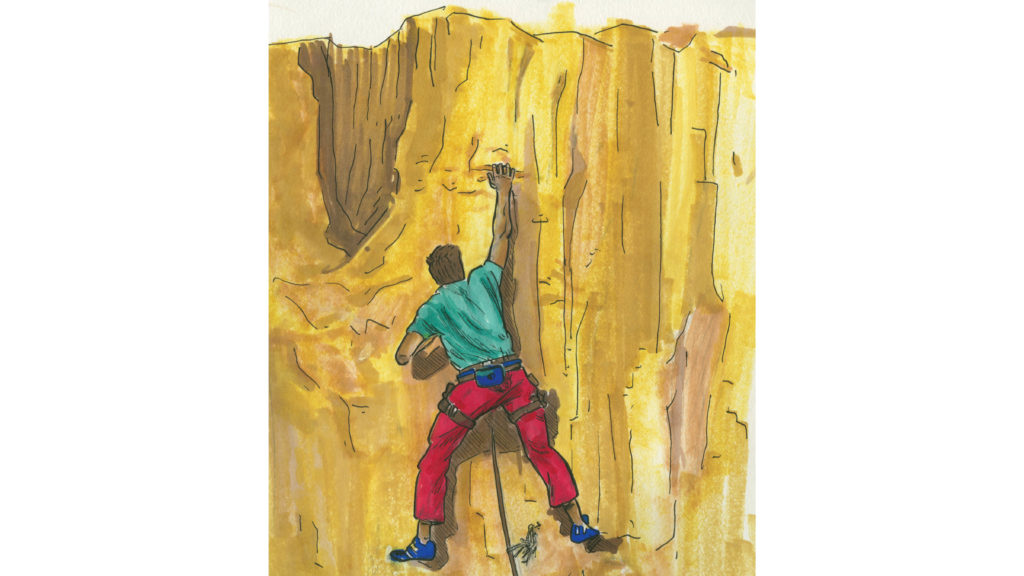 This year, people have questioned my nationality more than ever before. Peers say that I am anything but Dominican because I don’t look or act “Dominican.” They expect me to have black hair, a tanner skin tone, and to be a ludicrously phenomenal baseball player. They fail to realize that they are utterly and hopelessly wrong.

I come from a family where we must represent who we are and what we stand for by being the best version of ourselves. We still eat mangú con huevos and plátanos con salami. We still stay up late watching Telemundo and Univision. We still hold true to the Dominican tradition of speaking very fast castellano while spending hours with our entire families.

Last summer I joined Summer Search for an extended backpacking expedition in Colorado. Up in the clouds, oxygen is scarce. The abundance of forested areas is juxtaposed by the wide-open plains of grass that dance in tune with the breeze. It creates an eerie sense of unearthly euphoria that turns people like me into deeper thinkers. In Colorado, I found places to think about who I am.

As an ice-breaker, we played a game based on characteristics, habits, and traits that each of us have. I met another student from Boston, and he proceeded to ask me “what I was.” I told him I was Dominican. He was baffled and decided to distinguish me by calling me the “chill Dominican.” He believed Dominicans were loud, rambunctious, and had a lot of “colorful” character. I’d like to be a model of my heritage rather than let others have a tarnished perception of my culture. That was the point at which I realized I had to change his perception of what my people are really like.

One day, we emerged from the trees to see a colossally sky-shattering rock goliath that seemed unruly and unscalable. Our instructors told us that we would have to conquer this beast in order to prove ourselves. When we were a couple hundred feet up, our narrow path was obstructed by a gigantic loose boulder. Our only alternative was to turn the hike into a vertical climb along the jagged edges of the rock face veering off the path. One wrong step would surely lead to death. The rock goliath tested us. Those who could not handle the challenge were not allowed to go forward, their minds and hearts not in it. I didn’t ponder my decision for too long. I began to climb.

He knew I was capable of making it, too. I thought about how someone like him—who spends his time passing judgment on others—might be too busy to know things about himself. He was always looking to rise above by putting others below. And he couldn’t handle knowing that there were others better than him.

Storm clouds fast approached, and sunny skies were consumed by a thick gray mist. We were 1,000 feet up. The wind picked up and hurled blinding puffs of dust into our faces. We had to hurry before the cascade of rain fell upon us. Nature was hell-bent on taking us down. Eventually, he felt weak and accepted what the instructors told us, that we had to turn back due to the weather.

He overestimated his abilities and rage consumed him as he watched me press on. We battled it out as the first droplets of water smacked our muddy, hardened faces. He was unhinged, tired, and about to drop on the floor—and I capitalized on his weaknesses. I dodged his shots with ease. Thunder clapped overhead. Everyone watched in awe as I ended the confrontation. I was not going to let him turn my push for recognition into an uncivilized plight for dominance, but at the same time I let him know he wasn’t going to get in the way of my goal.

It's Not the Stone That Brings You Strength

In this collection of myths, re-told and re-visited, 11th grade students from the John D. O'Bryant School of Mathematics and Science explore culture and identity.

More amazing student stories See all student work
Takis, Ahh! by Xavier
Untitled by Raiden
My Reflection, Before and After by LaJanae
Better Than You Think by Darronté
See All Student Work