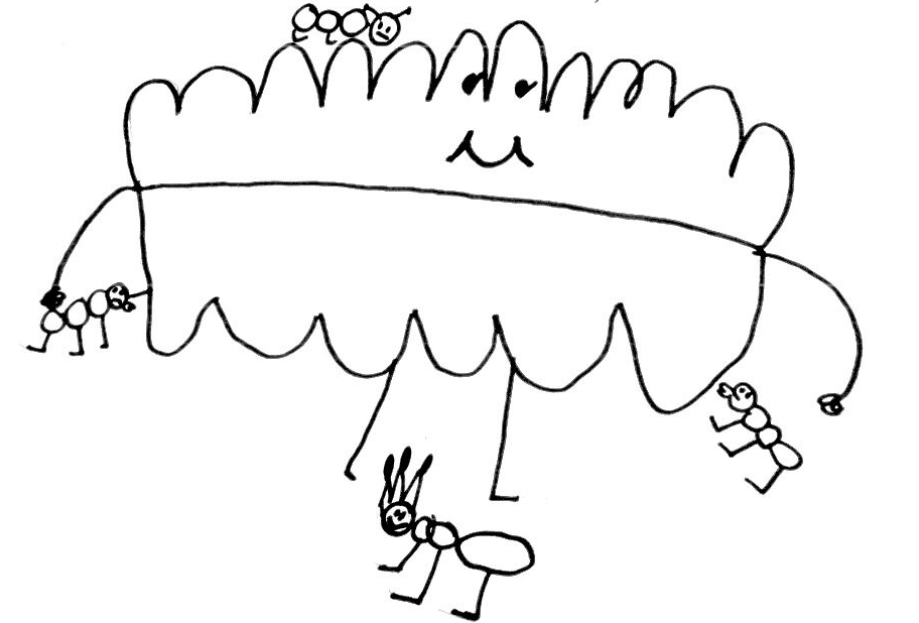 Today, my mom and I discovered the world of foodimals. They live in a jungle with food all over.

The foodimals looked just like monsters and other creatures, but they were made of food. There were candy unicorns, spinach ants, and lasagnasauruses everywhere.

In the jungle, there were also spinach leaves and celery branches, and the ground was made out of cheese. I was starving because I didn’t eat all day. I asked my mom if I could eat the foodimals, but she said I shouldn’t eat all the food in one day. I asked, “Why?” because I was so hungry.

Then I noticed a vegan lasagnasaurus. It looked so big and yummy, but the spinach ants started eating it one by one. I walked away from them feasting on the lasagnasaurus and noticed candy unicorns in the jungle. They were pink and white and looked like ponies. I went to bite one of them, but I realized that my feet were stuck in the sticky cheese on the ground. I began to sink to the bottom, so I decided to eat my way out of the cheese. My mom didn’t notice I was sinking because she was too busy texting on her phone.

After I ate my way out or the cheese, I was so full. My mom and I decided to head home on a wooden boat parked near a waterfall in the jungle. A cucumber who looked like a human was the captain of the boat. My mom got so hungry, so she ate the cucumber and decided to drive the boat herself.

As my mom drove the boat, I noticed that there was a candy unicorn on the boat with us. My mom said, “Let’s keep it.” I said, “Mom, you’re allergic to fur.” She said, “It doesn’t matter, because it’s made out of candy.”

We brought the unicorn home and I named her Uni. We sat on the couch and watched TV. My mom ordered a vegan pizza. We ate lunch with our new pet candy unicorn.

Nazahah can stand on her head, jump rope, and also make friends very easily. She's thankful for the roof over her head and for her loving family. Nazahah hopes to own a pink car in the future.