By Nelise in Before This Place Filled With Zombies 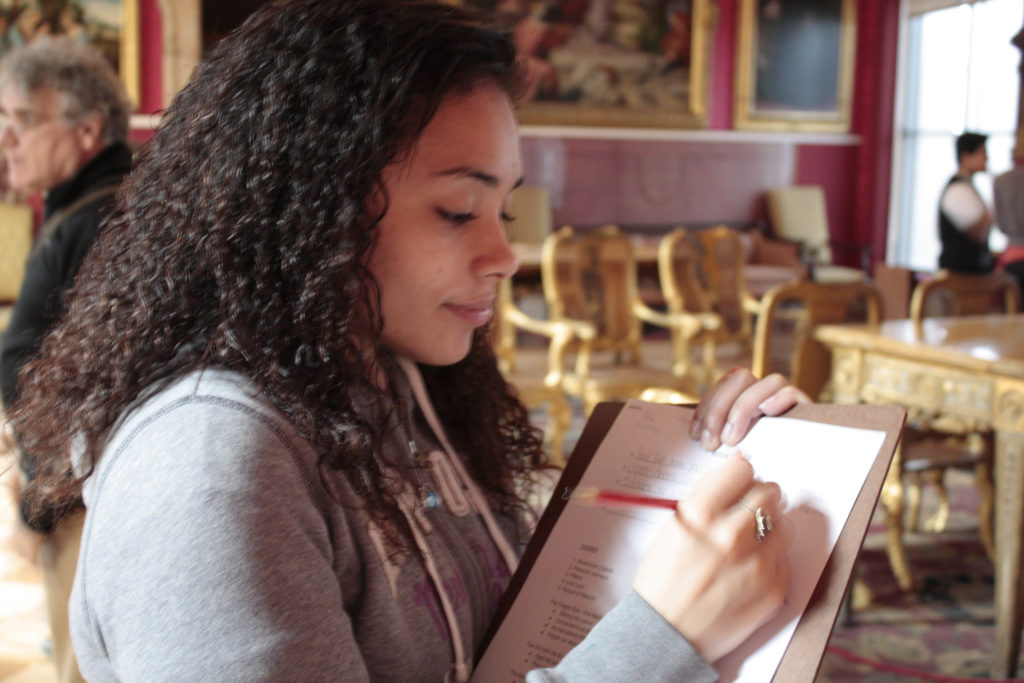 Angie lived in a building in a city in Puerto Rico, where she walked all the time. She was 14 years old and had long black hair and tan skin. She had wanted to be a dancer ever since she was a little girl. She wished she could be a ballerina.

Puerto Rico is a very warm place. It has lots of beaches and really blue oceans, but where Angie lived were many buildings. The color on the buildings had faded away. There were lots of concrete roads, but no buses to take her where she wanted to go.

Angie always saw a lady that walked through the buildings she lived in. She had long black hair that flowed with the wind and lovely green eyes. The woman walked with a long black scarf around her waist. Angie loved how pretty she was. She admired her so and decided to follow her. The lady that Angie followed was called Jamila.

Jamila lived on top of El Jaleo, a dance hall. The hall had pretty white wallpaper, and beautiful instruments with amazing carvings—guitars, clarinets, and flutes—hung on the wall in a big room. The hall had a balcony.

Jamila usually watched the people that danced there for events and parties. The people that owned El Jaleo were planning a party on Friday at 7:00 p.m. that would end with a magical performance. There were notices on the light poles. It was the party that would get you noticed.

Angie finally went up to Jamila. “Hi,” she said. “Are you going to dance?”

“Yes, but I am scared that people will judge me,” said Jamila. She gave Angie a look and said, “When Friday comes, I will show you.”

On Friday, the day of the dance, everybody was there but nobody was dancing. The dancers were shy—nobody wanted to go first. As Angie turned, she saw the beautiful lady come in, wearing a black scarf, beautiful black heels, and a pink tutu. The music played. Jamila looked around the room and started to dance. She spun and turned and threw herself into the air like a ballerina. Then everybody started to spin and turn and dance with her. Jamila danced all night. As Angie watched, a darkness seemed to cover Jamila, and the next thing she noticed, Jamila was gone.

The crowd looked all over, but she was nowhere to be found. The crowd cheered to show their appreciation and to see if she would come back. They whistled and clapped harder. But she was gone. They had seen the last of Jamila.

Angie continued dancing and eventually became a professional because she wanted to show Jamila, wherever she was, that she could be a great dancer too.

Before This Place Filled With Zombies