By Isaac in When the Lights Go Out 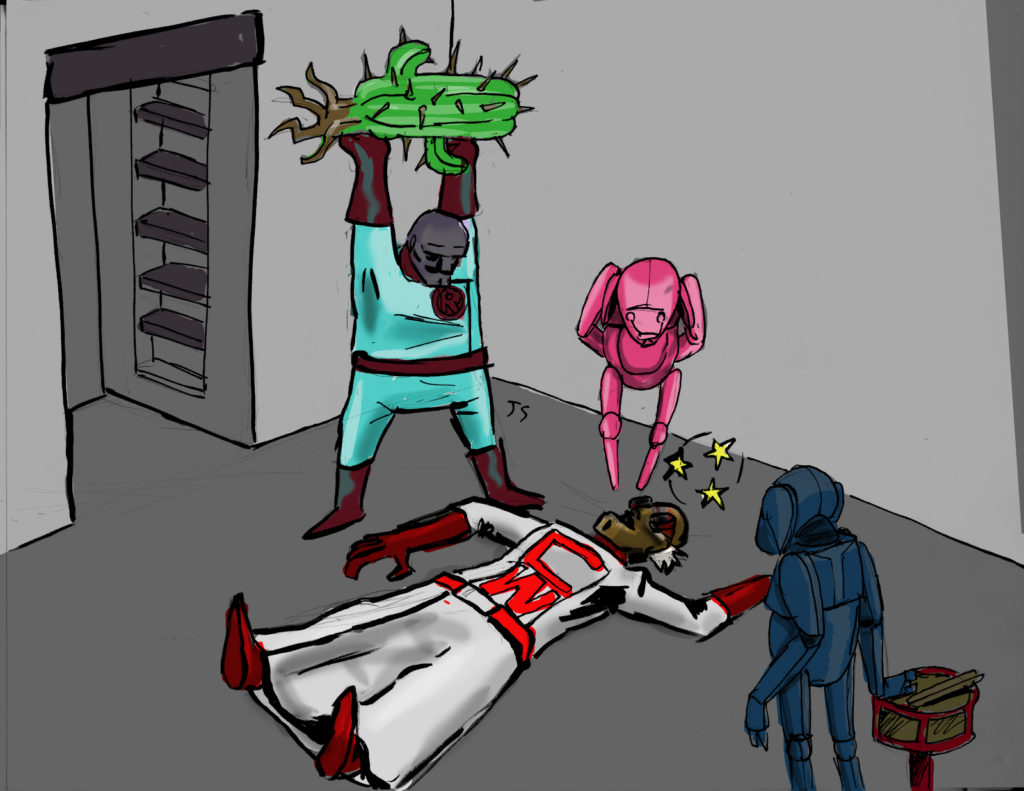 Chapter One: The Return

DR. CIVIL WAR: What do you want, for the second time?

ROCKO: You’re the person that freed me from jail. We can work together!

DR. CIVIL WAR: I freed you from jail?!

ROCKO: Yeah, you tricked the cop into shooting the wall by accident, and it went through the wall and hit my jail cell bars and freed me.

DR. CIVIL WAR: Then what else did you do?

ROCKO: There was a cop coming around the corner, so I jumped in the vent really quickly so he didn’t notice me. And then I wasn’t paying attention and I fell through a hole. Then I fell out of the vent and I saw a cop setting up a sensor laser coming around the corner. I went behind him really quietly, then I took his clothes and I shoved him into a closet. I walked out past the other cops and they didn’t notice me. I drove away and made a quick stop at Dunkin’ Donuts.

DR. CIVIL WAR: Wait, wait, wait, I didn’t ask for the fun parts, I just asked how you got out. Now you’re just making me hungry. Continue.

ROCKO: Don’t worry, I have one more doughnut left . . . with sprinkles!

ROCKO: OK, OK . . . Then I saw this ladder and, for no reason, I went up to the roof, hoping there was some place to rob. I saw you walking in the other direction, going to your secret base. I followed you to the elevator and when the elevator was going up, I jumped through the doors super fast so it wouldn’t chop me in half. I grabbed the bottom of the elevator with one hand and it carried me up. When you got off, the elevator kept going up, but I stepped out of the doors really fast, and here we are.

DR. CIVIL WAR: So why did you actually come here? I wasn’t asking for the whole story. Now I’m mad! Grrrr . . . you’ve wasted perfectly good time! Now my cereal in the kitchen is soggy!

ROCKO: What kind of bad guy eats cereal? You know what, never mind. The reason why I’m here is that I was thinking we could build a MEGA ROBOT!

DR. CIVIL WAR: Why are you acting like you know me? Because I know you.

ROCKO: Remember the big general robot you built that was the size of Nexar, the Good Robot who defeated your army of robots?

ROCKO: You told me to control it. I’m one of your minions.

ROCKO: Did you just pass out? Oh, I forgot I have this password to summon the minions (Typing: TICK TACKLE TIC TIC)

ROCKO: It’s Dale and Charlene! Get the cactus!

DALE AND CHARLENE: Analyzing. (Bzzz…) Welcome, Minion 7388. You have been gone for such a long time.

ROCKO: Get the cactus.

DALE AND CHARLENE: Which size do you want?

ROCKO: Mediumish. And get the one that cures passing out. Let’s do this.

DALE: Here are metal gloves so that you don’t poke yourself because we don’t have a pot for the cactus. (They poke Dr. Civil War with the cactus. POKE poke POKE poke)

DR. CIVIL WAR: Hey hey hey! Why did you poke me? Don’t you know anything about faking?

DR. CIVIL WAR: You’re gonna have to build the legs and arms for the MEGA ROBOT.

DR. CIVIL WAR: Dale, get out of here with that drum set!

DALE: Sorry master, but Charlene told me to do it.

CHARLENE: I did not!

DR. CIVIL WAR: Both of you just get out of here! Let’s get started.

ROCKO: Do you have some Gatorade? I’m thirsty.

NARRATOR: Nexar is solving a murder mystery on 77 Taneger Road in Washington D.C.. Then his sensors pick up the MEGA ROBOT. (KLUNK! The MEGA ROBOT defends with his arm, and then uppercuts the Nexar into the air.) (The MEGA ROBOT turns his hand into a giant laser) ROCKO: Go in X-ray mode and check if any of his bones are broken. (BZZ)

DALE: His left ankle is dislocated.

ROCKO: Well, he didn’t fail with everything. He defeated yo—

When the Lights Go Out

Original spooky/scary stories, poems, comics, and plays written by the students of 826 Boston’s Egleston Square After-School Writing and Tutoring program. Fall 2019. Volume 1 is targeted for younger readers (grades 1-5), and Volume 2 towards older readers (grade 6 and up).