By Kavon in A Place for Me in the World 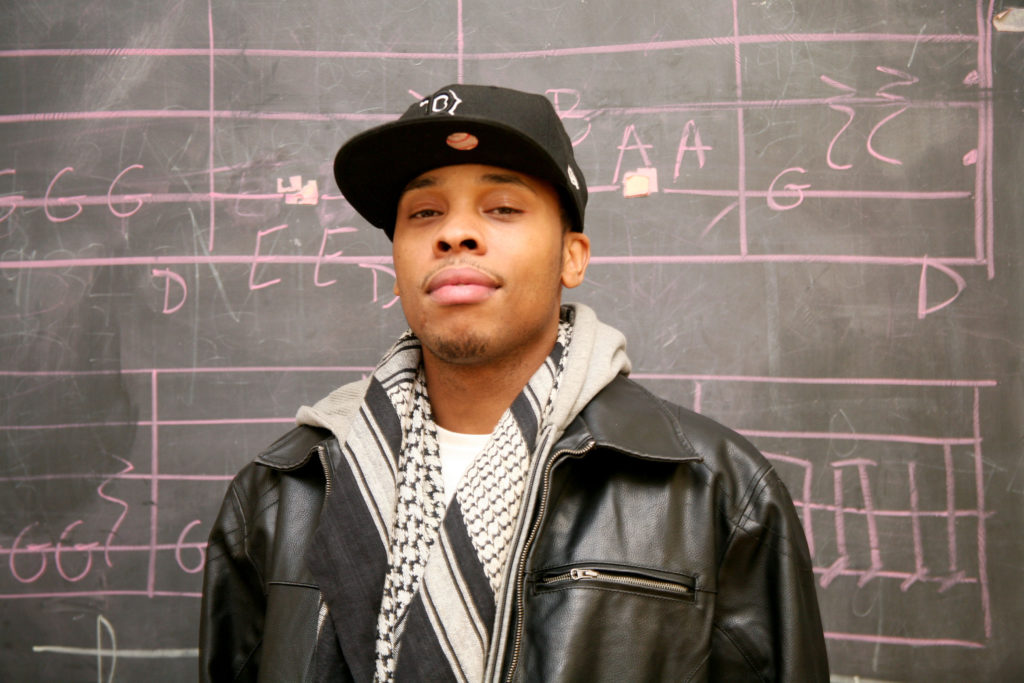 Cliff considers himself an artist. During the day, he’s a cook, but he’s thinking about music most of the time. He writes poetry and performs songs. He’s written at least one hundred songs.

When I rap, I bring messages into my music. My father was a musician. He was a jazz player, and also a jazz singer. My father inspired me when I used to listen to him and his friends play music. They would play the piano, the bass guitar, and every now and again I’d hear him play the saxophone.

Usually I write before I hear the instrumental. If I chose to listen to a beat while writing, I wouldn’t be able to write on paper. I would have to think of the words in my head because following the tempo of a beat while writing is too complicated for me. I have to think of lyrics in my head when I write the beats. Before I pick out a beat that I want, I already have the lyrics I need for it.

I perform at a lot of places: New Jersey, Pennsylvania, New York, Illinois, North Carolina. My favorite place to perform is Chicago. It’s a hot crowd. The ﬁrst time I performed, I was a bit nervous. I was worried I would skip a line or two, or be off beat. But I didn’t fall through; everything worked out, and we got the recognition we deserved. Now I have my own studio, and I have a few other studios that I go to. My studio is really called a pre-production studio, and the big studios are more professional. When you’re ready to go into and mix and master a song, you go to the big studios to ﬁnish it.

I’ve been on tour with the New Kids on the Block. I know Mark Wahlberg. Wahlberg and I got into a ﬁght as kids, and he broke my bike. I know New Edition and I have been around LL Cool J, so you know I have done a lot. I’ve put in a lot of work, and with all the love and passion I put into this, I want to actually get something out of it. It’s never too late, but a dream is a dream. If I were to give up my dream, it would only be so my kid could have one.

I always wanted to interview a rapper. Most people don’t usually call rappers artists, but I do. I wanted to talk to a rapper who is on TV and has millions of dollars. But listening to Cliff talk about his experience of being an artist really opened my eyes. I was surprised at how much work you have to do. You have to write songs and you have to edit them every week. What really struck me was when Cliff said, “When I rap, I bring messages in my music. It’s not subliminal, it is up front in what you hear. I’m telling a story.” What that meant to me is that when he raps, he is talking to you about life, his life. All great rappers do that in their songs. Those words spoke to me.

Before I did this interview, I thought all rappers came from the streets and rapped about their life living in the hood. Well, I thought wrong. Rappers are really smart people. They read books and they have a good vocabulary from reading. Rappers learn words from reading the dictionary. They ﬁnd a word, read about what the word means, and then use it in a creative slang way in their song. I know that my dream is not to be a rapper, but if I do become one, I know that I would have to read a lot of books to build up my vocabulary.

My favorite part was when Cliff said, “You know, it’s never too late, but a dream is a dream. If I were to give up my dream, it would be so my kid could have one; that’s the only way I would give up my dream.” I’m that kid. I’m Cliff’s son.