By Xavier in The Watch Went Beep Beep: Stories of Apocalypse and Survival 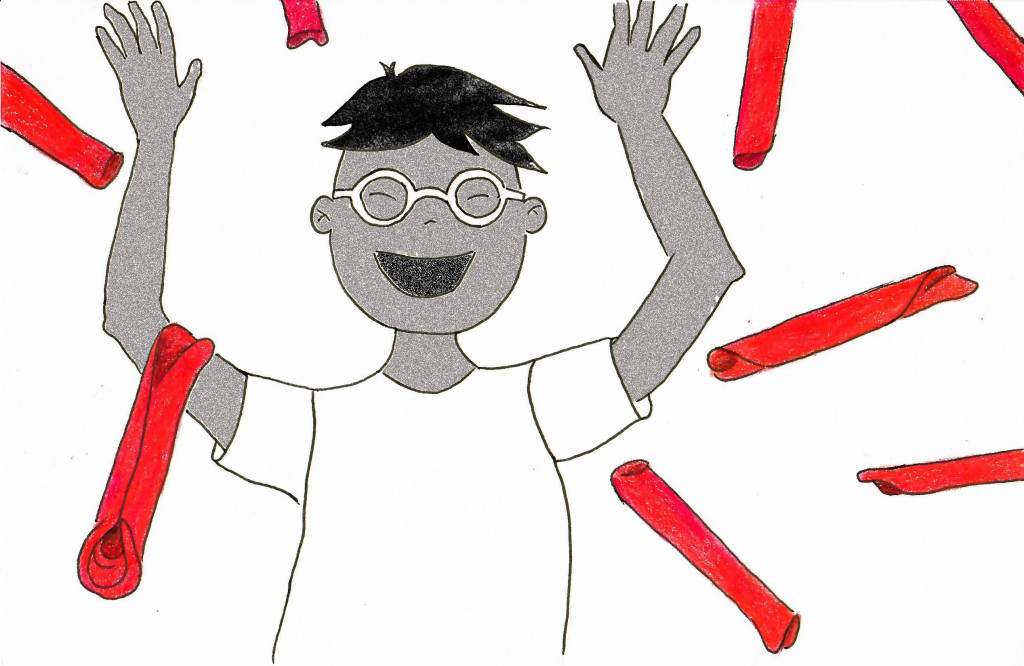 A boy named Takii loved Takis because they were hot. His favorite kind was hot chili pepper. He ate them 24/7, but mostly on Fridays because he had five letters in his name and Friday is the fifth day of the week.

One day, Takii was eating Takis and then two of them became big. On Friday the thirteenth, Takis took over the world. There was so much blood . . . oh wait, I think that was the red powder.

One Taki said, “Ahh, my sweet and precious chili and lime red powder.”

The other Taki said, “Stop, that tickles!” The Takis’ boss said, “Stop, you idiots! You’re making it easy for them.”

But the people had already eaten the two big Takis, and were now eating the regular-size Takis. The people had won.

“It was just a dream,” he said. He was scared. Takii said, “Man, that was a scary dream! Mom, can I have a bag of Takis to take to school?”

“Sure, honey.” Takii was at school, and it was time for lunch. He opened his bag of Takis and stopped to look at it. His Taki said, “You jerk, you shouldn’t have woken up from your dream.”

He threw the Taki on the floor and said, “It was just a dream” in a panicked voice. He went to go pick up the Taki and said, “Five-second rule.” He ate the Taki . . . or was it a dream? He asked himself if anyone had noticed it. He said, “Probably not, it was too small of a voice.”

I am nine years old. The bravest thing I ever did was go through the bushes of thorns to get my football. One thing people in my family really don't know about is Takis. If they made a movie about me it would be called "Diced," and I would be the producer or executive producer.

The Watch Went Beep Beep: Stories of Apocalypse and Survival

Sign Up
More amazing student stories See all student work
Dream by Stephany
Who Am I? by Camarah
La Chinchintora by Cindy
Tarantula Sandwich! by Joshuan
See All Student Work