By Cindy in It's Not the Stone That Brings You Strength 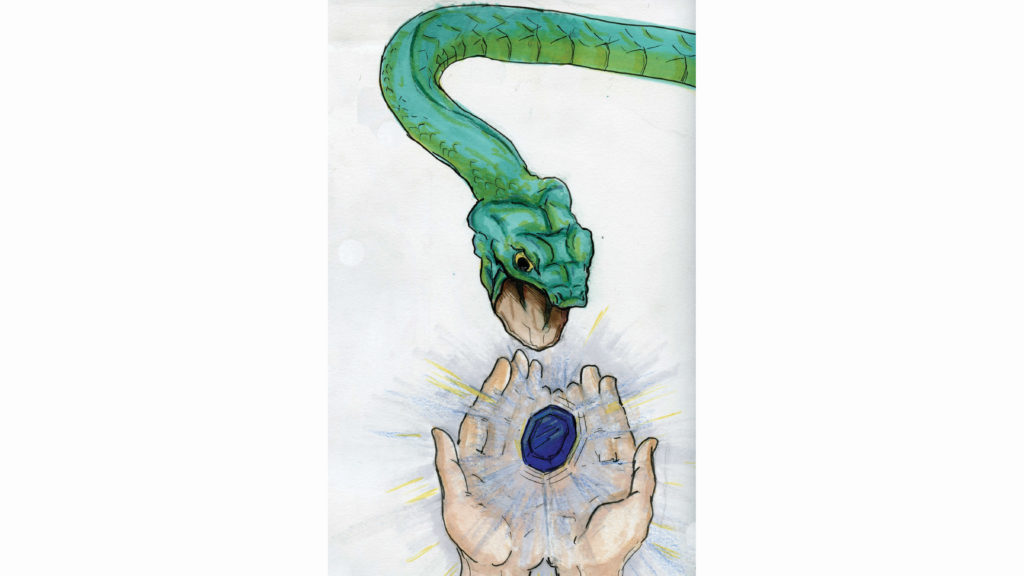 In the mountains of Monte Cristo in my country, El Salvador, there lives a snake called La Chinchintora who throws punches like a whip. It is not poisonous. It eats fruits from the trees it inhabits. La Chinchintora is a medium-sized, greenish snake that intertwines itself in vines. This snake only fights when it is attacked, and does not stop fighting until it wins. The person who fights against it and loses is left with large boils on their skin that slowly and painfully kill them.

My father told me that many people in his village have discovered that as the snake fights, it vomits out a blue stone. If the person fighting does not win, the snake swallows the blue stone once again and leaves. The winner must retrieve the blue stone once they win, as it is a sign of good luck and brings strength from that moment on.

This magical stone is a flat stone with a shiny ocean blue color; it is two square inches wide and an inch thick. Whoever possesses this stone must keep it wrapped in a handkerchief so the light will not escape from it. The winner against La Chinchintora not only gets the triumph of beating the snake, but also receives the power and strength to achieve whatever they want. This stone must be kept within the person’s pocket at all times to receive the good that the stone possesses.

When I was eight years old, my mother presented me with an emerald stone given to her by her grandparents, which she always carried around. I had never received anything so simple, and yet I knew it had to be treasured and taken care of. I thought this emerald stone would bring me good luck, just like it did for my mom.

After a while, I noticed the stone was not giving me any luck. “Mom, the emerald stone that abuelita and abuelito gave you does not give me the good luck it gave you,” I said.

My mom started to laugh. “Mija, it is not an object that gives you good luck. It’s the sentimental value that is most important.”

Many people believe that the only way they will have strength is if they carry a magical stone or a certain object around in their pocket, but it is not the stone that brings you strength.

It's Not the Stone That Brings You Strength

In this collection of myths, re-told and re-visited, 11th grade students from the John D. O'Bryant School of Mathematics and Science explore culture and identity.