By Wahaaj in Really Fangtastic: Vampires, Zombies, and Other Monsters 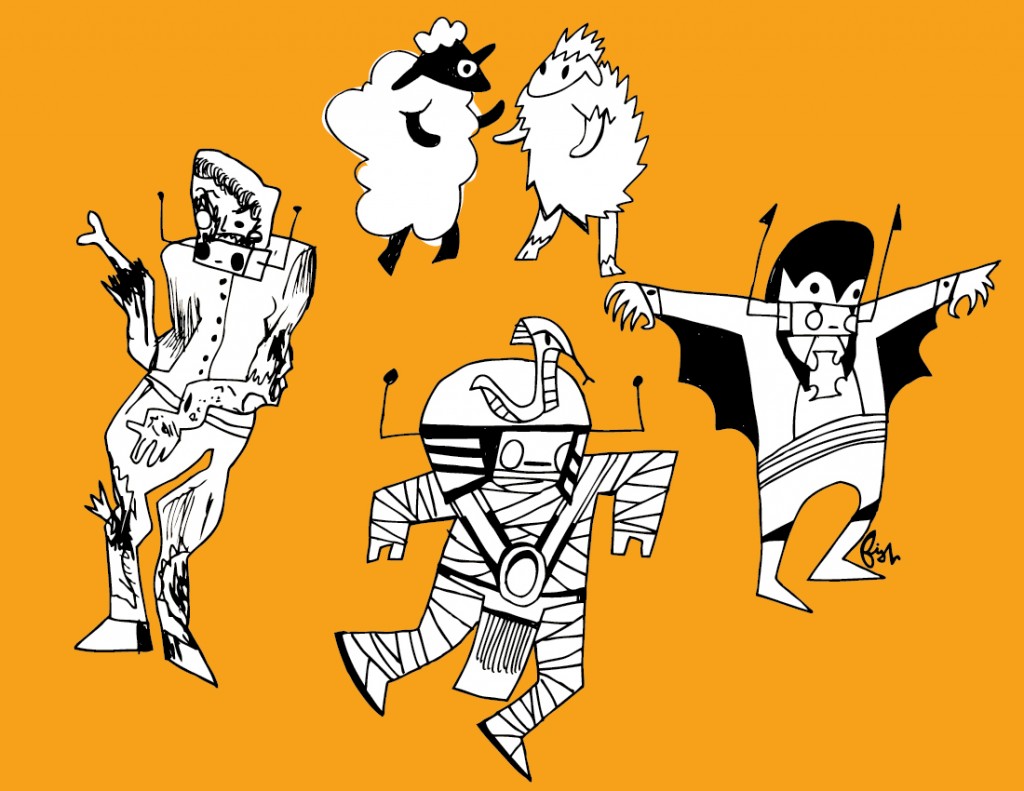 How did Halloween get invented? Well, here is the story:

Once upon a time there was a sheep named Oddy. He was a regular sheep in the grasslands with all the other sheep. Then, one day he fell in the Arctic sea, and he saw a big wave. It pushed him to shore towards a cyclops’s cave. Oddy took big steps towards the cave. The cyclops had a super power that could turn anyone into a cyclops like him.

Oddy went inside the cyclops’s lair. It was spooky for the sheep, but the cyclops had to find food and water to survive. Then the cyclops burst behind the rock and turned Oddy into a sheep cyclops. He called himself Sheepclops, but all the other sheep still called him Oddy.

Oddy had the power to turn anything into a cyclops like him. Oddy realized that he had one middle eye. He was very scared. Then he got the hang of having the one eye.

One day, Oddy came to an island with humans. The humans were scared, and he took over their land. Then Oddy and the humans sank in the ocean, and the humans turned into mermaids. The humans went to live with the Atlanteans who live in Atlantis. Meanwhile Oddy used his transforming powers to turn into a bird, and he flew into the sky.

Then one day, Oddy met a friend named Mano. Mano was an electric sheep. Oddy and Mano became friends because a regular sheep and an electric sheep have special noses to smell each other. They smelled each other’s innocence, and they said, “Do you want to be friends?”

Then one day, Mano got eaten by a whale shark. Mano was scared, and he used an electric warning zap on the whale shark to make it open its mouth. Oddy transformed into a sheep fish and swam to where the whale shark was. He saw Mano and said, “How did you get out!?”

Mano said, “By using electric powers! And why are you a fish?” They both went to the surface, and Oddy transformed back into a Sheepclops. They saw an abandoned boat, and they got on it. Mano stepped onto a piece of golden candy.

“These creatures will eat you up if you touch the golden candy. The candy has magical, evil powers that could turn you into a piece of golden evil candy,” said Mano.

The creatures had an idea: “Let’s celebrate ourselves and call it Halloween. And on Halloween, the top creatures are vampires, cyclopes, wolves, zombies, and robots.”

Oddy and Mano got married and had children. They went back home in the summer and lived happily ever after.

Wahaaj is enthusiastic. He likes pizza and french fries, and he loves to spell Mississippi. He also loves playing wall ball.

This book was written by after-school students during Fall 2013-Winter 2014. With chapter titles like "Topped with Cobwebs and Eyeballs" and "You'll Have to Run," Really Fangtastic delivers a spooky, hilarious wallop of fun.