By Kiana in And Then My Teacher Bit Me! 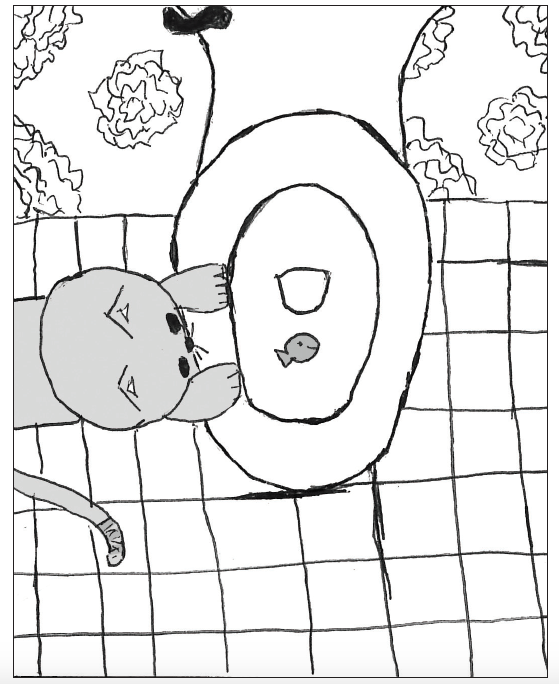 Platypus, just an ordinary cat, was craving fish, which was perfect timing because his owners, Kristen and Vinn, had bought a new fish called Kale. Platypus loved fish, but this one looked delicious. (Not that all fish don’t, but whatever—we’re getting off track!) Ever since they got that fish, Platypus never took his eyes off it. Platypus was a five-star fish eater and he already had a plan to capture and eat Kale.

The first thing Platypus needed to do was distract his masters, but then he got an even better idea: wait until it was nighttime! He thought it was a brilliant idea; he would just eat the fish. Easy, right? Platypus slept the whole day so he could focus on his plan. When Platypus woke up from his sleep, he immediately ate some food and went back to sleep because The Great Platypus needed to be well-rested for this plan. He fell asleep again, but in what seemed like milliseconds, he woke up to his owners packing up to go to Mars, but Platypus didn’t think about the move. Instead he thought he could finally eat Kale! But when he woke up the next day, Kale wasn’t there. He looked everywhere, then Platypus found Kale in the toilet. How did Kale get in there? He thought. Platypus tried to get Kale from the toilet, but he just couldn’t—Kale was too fast. Platypus couldn’t believe it; he was a disgrace to true master fish eaters. No, I will not lose my title just because of a little fish. So he would wait until Kale went to his tank and then BOOM, he would capture Kale.

He waited about twenty hours until Kale finally went back in his tank. Platypus went for it, not thinking, and at the moment he was going to capture Kale, he suddenly woke up. Looking at the tank, Kale was gone— he forgot he already ate Kale! Oh well.

Kiana is 11 years old and her pet peeve is rude people. She is very grateful for her way of life, and she strongly believes in brushing her teeth.

Sign Up
More amazing student stories See all student work
The Man of the Year by Ngan
Concert Pianist: Jacqueline Schwab by Sela
Please Don’t Eat Me, Fudge! by Adriana
Strong Should Have Been Her Name by Shanese
See All Student Work