By Hassan in Pitch Quiet: Tales of Traps and Escapes 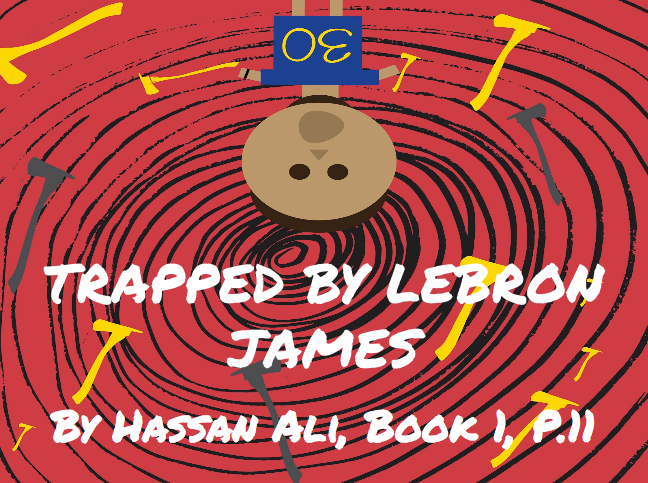 One day, on June 19, after Game 7 of the NBA Finals, two hours after the Cavalier’s ultimate win, Stephen Curry (who played in the NBA for the Warriors) was going to his BMW M Series and BOOM! Stephen Curry got kidnapped by LeBron James!

LeBron James was the best player on his team, the Cavaliers. LeBron James kidnapped Curry because he didn’t want to give him a chance to win next season. He was secretly going to put Curry in his dungeon. Nobody would think he would do such a thing.

LeBron took his keys and his car and took Stephen Curry back to his dark dungeon. Then Stephen Curry was hung upside down in the dungeon, which smelled like farts and was filled with axes. It looked medieval. Curry was hung over a pool of acid, which he would be dumped into any minute!

Then LeBron James left to celebrate his win. For safety, Stephen Curry had a pocket knife, so he cut the rope. Then he jumped off the edge of the pool of acid, climbed up the dungeon wall, and got outside, where he was all alone.

But then Stephen Curry remembered that he was a secret agent with the whole Warriors team, so he used his secret agent watch to call his boss to send a chopper, which was at his secret court in Miami where he practiced with his team to get better, to pick him up. So he went back to his secret agent lab and started practicing his shots.

Then LeBron James went back to his house to get a little surprise for Stephen Curry, but he could not believe his eyes when he opened the door! Stephen Curry was gone! LeBron tore up everything in his path and screamed, “Whyyy!” LeBron James was not going to have a good next season!

Hassan is a very curious 10-year-old. He’s serious when it comes to serious stuff. His favorite movie is Doctor Strange.

Stories of traps and escapes written by after-school students.

Sign Up
More amazing student stories See all student work
Strong Should Have Been Her Name by Shanese
She Also Dreams about You: A Conversation Between Boston and the Dominican Republic by Arlyn
La Chinchintora by Cindy
The Awesome Adventure by Gabriela
See All Student Work