By Adam in And Then My Teacher Bit Me! 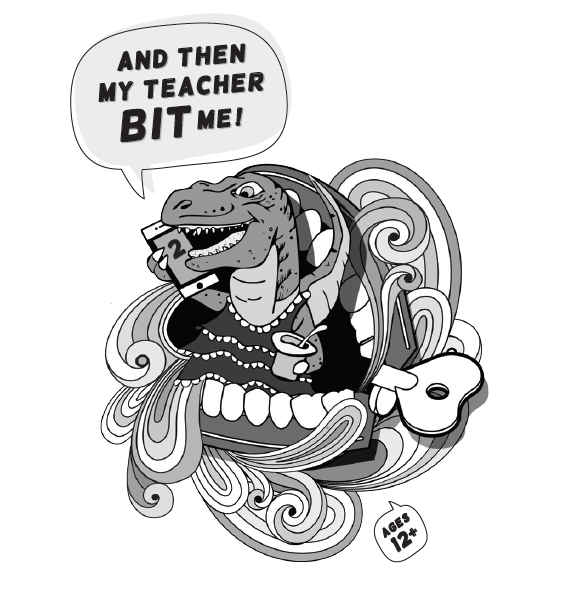 I burst through the clouds, bits of cotton-like fluff flying every which way. This was the most amazing sensation, and I was the only one in the world allowed to experience it.

Soft, white feathers made up my large wings, which had sprouted during the night. It took some time (and plenty of falling), but I learned to fly. With the slightest flap, my wings kept me suspended above the balls of cotton as I glided through the air. My black hair blew behind me.

As I flew through the fierce orange glow of the sunset, I let out a cheerful whoop.

Suddenly the flapping stopped. With horror, I realized my wings were gone. I was suspended in midair for only a second, but it felt like a millennium. Then my descent back to earth began, and I was falling a mile a second.

I burst through the clouds once more, this time in the opposite direction, and the amazing sensation turned to a feeling of terror. I caught a glimpse of the rippling ocean waves below me, and my insides were more knotted than a shoelace.

The ocean grew closer and closer, the familiar salty scent invading my nostrils. I slammed my eyes shut. I heard a splash as my body hit the water. I felt the chill of icy water and then—nothing. Just darkness.

My eyes flew open, although there wouldn’t have been much difference if I had kept them closed. Even as my light blue eyes adjusted, I could only see about two or three feet ahead of me. However, that was all I needed to make out tables lined with tools and beakers.

“What on Earth?” I asked aloud, noticing that I was not wet anymore. “Wasn’t I just drowning?” I pondered out loud.

It was then that I saw a hunched figure in a white lab coat, whose back was turned to me. I tried to move, but my action was limited by metal restraints. My struggle resulted in the loud clanging of metal, and the man turned to face me. He had jet-black hair and blue eyes like mine, and he looked to be six feet tall. He clutched a drill in his hand as he approached me slowly.

More silence. He activated the machine and brought its whirring tip to the surface of my body. I struggled to break free of my restraints, which proved futile.

The device pressed against my body, and I let out a soft no.

I bolted up, breathing heavily, my heart racing like an Olympic runner’s, sweat pouring down my face like rain on a window. Darkness surrounded me once more, but this time I was in the comfort of my room.

“Just a dream,” I assured myself out loud, calming my nerves slightly.

Eventually I slipped back into unconsciousness. What I failed to notice, however, was the silhouette of the large creature lurking in the corner.

Adam is an imaginative individual with a sense of humor. He is a ninth grader who attends John D. O’Bryant high school, and he has been attending 826 Boston for three years. He is 14 years old.

Sign Up
More amazing student stories See all student work
The Evil Waffles and Brian the Superhero by Javier
Food Diary Entry by Gabriel
She Also Dreams about You: A Conversation Between Boston and the Dominican Republic by Arlyn
Untitled by Laisha
See All Student Work