By La'renz in A Place for Me in the World 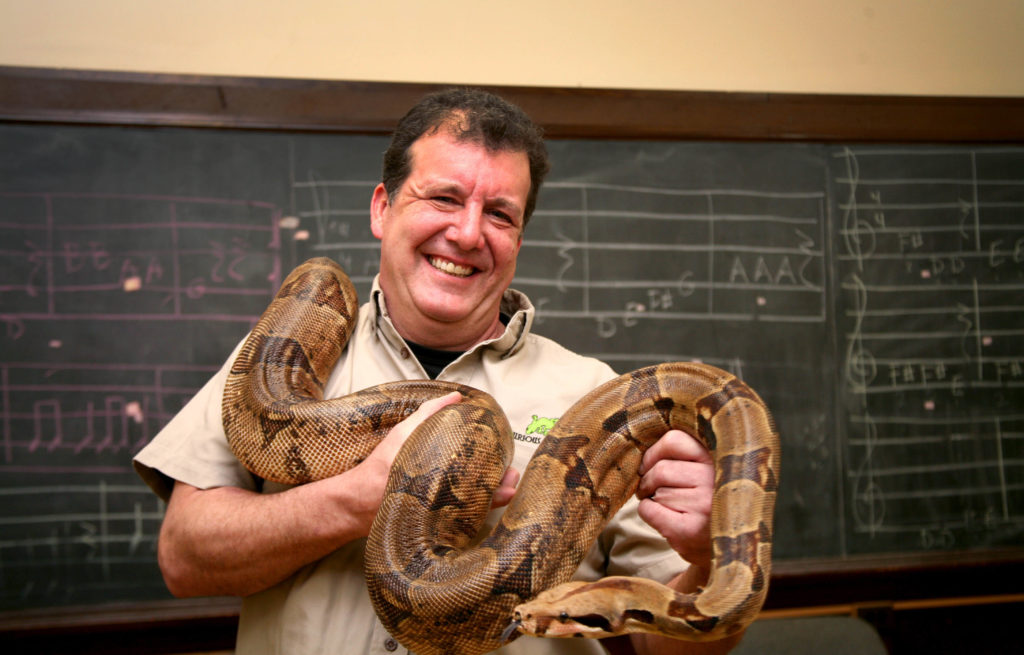 Dean Kosch is the owner of Curious Creatures, a company that runs live educational animal shows. During our interview, Dean brought in a boa constrictor, two baby anacondas, and two alligators. He started working with snakes in 1987 because he just liked handling and learning about the snakes.

The most venomous snake? They say it’s the brown snake from Australia, but there are a lot of venomous snakes that can kill you in thirty seconds or forty seconds or a minute. There are cobras, mambas, baboon vipers, and rattlesnakes. Some people even die from being bitten by copperheads, which are found in Connecticut. But the way to avoid being bitten by snakes is to not pick them up. That’s how people get bit.

The anaconda is the strongest snake, I’d say. They’re so strong, they even eat crocodiles, and there are not too many animals that eat crocodiles. The Burmese python is very strong, too. I’ve learned that some types of snakes are pretty smart. They’ll look at you and recognize you. For example, the snakes that I do shows with, like Fluffy here . . . I’ll put her on the ground and she’ll always crawl towards me, because she knows that she’s safe with me.

Alligators are among my favorite reptiles to work with. Most of them can eat between ten and twenty mice and a couple of rats every other day! Alligators like to eat meat, ﬁsh, hot dogs, and chicken. They will also eat insects, like bees, butterﬂies, ants, and ﬂies. They will never eat vegetables, but they will always eat meat. I think alligators are really intelligent, because they know when I’m in the other room, opening the freezer and getting out their food. When I’m vacuuming the barn where they live, the vibration or the sound of the vacuum gets the alligators calling. It sounds like, “Wuuuuuuuuhhh.” That would be the scariest thing you could hear if you were out in the Everglades in Florida at night. It would probably mean that you were surrounded by alligators. During the day, the gators are pretty inactive. But at night, they’re looking and hunting.

I ﬁrst worked with snakes when I was playing with animals in my backyard. I started getting paid to handle snakes in 1987. Since then, I’ve had lots of snakes get loose. One crawled into bed with me once. It felt really cold, but it didn’t scare me too bad. I’ve been bitten by lots of snakes, too, but they were accidents — most of them happened during feeding. If I’m not careful, they miss with their mouths and bite my hand. And they usually let go right away. It doesn’t hurt.

When you handle snakes or you keep animals, it keeps you very consistent, because they need care every day. The hardest thing is going away on vacation, because your animals depend on you to give them food and water and to keep them clean and healthy. So, I think it’s made me a person that has been really consistent, working hard every day . . . even on holidays, right? The animals don’t know about holidays. Or Saturdays.

If I can change people’s opinions so they’re not afraid of snakes, it’s a good reason to be a snake handler, because snakes are beneﬁcial animals.

Before I interviewed Dean, I knew that I wanted to be a snake handler and interview one, too. I also wanted to interview an NFL football player and superstar named Trent Richardson, but I decided to interview a snake handler instead, because I thought it was cooler to work with and learn about snakes. Hearing more about Dean’s experience working with snakes and other types of reptiles made me think more about becoming a snake handler. He told me about the times he went into jungles to catch anacondas and Burmese and reticulated pythons, and also how he owns his own company, and that made me think about owning my own company that catches animals.

Another thing that surprised me is that Dean has been so successful as a snake handler. Dean is from Groveland, Massachusetts, but he has been to jungles, like the Amazon, the Congo, and some rain forests, too. He has to be careful because he might get too close to a big snake and get bitten. When a wild snake bites Dean, he still goes at it with the snake, grabbing and prying its mouth open to get it to let go of his arm, and then he gets in a position to catch the snake.

The best part of the whole interview was that Dean brought some animals with him. While I was holding the alligator, people were taking pictures. I was pretty scared to hold the alligator, but Dean told me it was okay. It was cool to get to hold the animals, but I don’t know how Dean does it every day. I will have to get used to holding them if I want to become a snake handler.