By Jamiyah in Pitch Quiet: Tales of Traps and Escapes 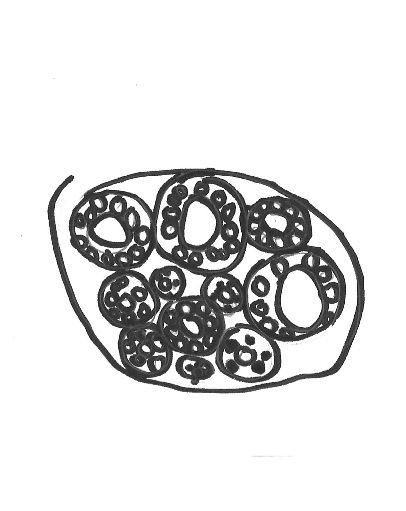 Once upon a time there lived a brother and a sister that didn’t have any money. They lived alone after their parents got in a car crash. The girl was from the United States and she had long hair in a bun. The boy had short hair and was from Africa, but he moved to the United States after he was born.

They really wanted some donuts, so they followed someone to a donut shop, and when he bought donuts and coffee, they followed him home. They knocked on his door, and then they tied him up and stole his donuts. The man was afraid and scared. They ate the two different kinds of donuts: chocolate frosted and strawberry frosted with sprinkles.

After that, they felt a little bit guilty. After the boy and girl untied him, they went to school with frosting all over their faces. The teacher got suspicious and wondered why they had frosting on their faces.

After school, the man went to their school and told the teacher, but he was easy on them because they were just little kids. The teacher told the principal what happened, but the teacher said she would handle it.

The next day the teacher asked the boy and girl to come to her desk. The kids felt guilty, so they told the teacher about stealing the donuts. So the teacher told the children if they didn’t want to steal, they just needed to ask. The children told her they were really hungry. Then she gave them a huge plate of donuts. She gave them donuts every morning when they got to school, and they never stole donuts again. The kids gave some of the donuts to the man, so the man got to have his own donuts and coffee, too.

I am 8 years old. The people I love the most are my mom, sister, and dad. If I had a superpower, it would be heart vision. I love to read.

Stories of traps and escapes written by after-school students.